We use cookies to make your experience better. To comply with the new e-Privacy directive, we need to ask for your consent to set the cookies. Learn more.

COVID-19 Status - Amber: Due to COVID and Higher Demand, Orders may take longer to arrive than usual. We are working to ensure safe delivery.

Currently, people are looking at this product

Add to Wish List
Spectral.DNC-S is so advanced that it comes as two separate formulas until users combine them during application for maximum performance. Most treatments work best in the early stages of hair shedding, before the follicles have a chance to atrophy.
Skip to the end of the images gallery 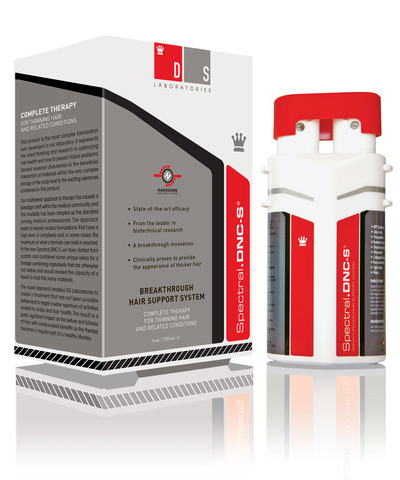 Skip to the beginning of the images gallery
Details

Spectral.DNC-S is so advanced that it comes as two separate formulas until users combine them during application for maximum performance.  Most treatments work best in the early stages of hair shedding, before the follicles have a chance to atrophy. But this advanced, dual-chamber system also performs well in latter stages of thinning due to the exhaustive research done by DS Laboratories.By packaging ingredients in two separate chambers, the delicate materials can be deployed in higher concentrations for higher performance.  Many patients who perceive little or no growth or thickening with minoxidil do see improvement after as little as three months using Spectral.DNC-S.

Shake well before use. Apply six sprays twice per day directly in the area of thinning hair. Rub in the liquid evenly and wash hands with soap and water immediately after use. Do not rinse. Spectral.DNC-S should be applied whether hair has been washed or not. Since no topical product yet devised cures hair loss permanently, this product, like minoxidil and other treatments, must be used continuously to receive its benefits.

Spectral.DNC-S overcomes these hurdles by employing plant-based stem cells, which exhibit many of the same properties and much of the same plasticity as human cells. An evolutionary botanical agent derived from plant stem cells now shows evidence of protecting and stimulating human epidermal stem cells and preventing many of the signs of scalp aging.
Current experimentation demonstrates in vitro that active phyto-compounds can stimulate the growth of human mesenchymal stem cells and help to protect them from attack by ultraviolet radiation.

Spectral.DNC-S contains procyanidin B-2, a polyphenol derived naturally from Malus domestica, because current research associates the extract with measurable improvement of the hairline as well as the vertex of the scalp.
In a double-blind clinical trial with humans, researchers investigated the effects of a 1% procyanidin B-2 solution over four months. Nineteen subjects received the procyanidin; 10 received a placebo.
In the procyanidin group, 79 percent showed greater hair diameter, compared to 30 percent in the placebo group. The treated group also showed a higher ratio of hairs over 40 micrometers in diameter and a higher total number of hairs.

The patented molecule Aminexil (diaminopyrimidine oxide) is one of the most widely studied and proven hair-growth agents because in clinical trials it is shown to protect roots, preserve hair, and strengthen fibers. The compound emerged from 10 years of proprietary research conducted in L'Oreal laboratories.
Innovative Aminexil prevents this premature aging, called rigidification of collagen. Once captured by the hairs' roots, the Aminexil preserves the suppleness and elasticity of the tissues that surround them. This method of action helps to build new hair fibers thicker, denser, and stronger.
In one trial with 120 men, hair shedding began to slow after as little as three weeks. Hair also became softer to the touch. In a placebo-controlled trial with 130 men, an additional eight percent of hair was maintained in anagen-growth phase after six weeks of Aminexil use.

When scientists at the University of San Francisco Wound Center applied a synthetic copper peptide to the severe wounds of several patients, wounds healed 30 percent faster, and significant stimulation of follicular cells occurred. One tripeptide complex grew hair in the wound area. Researchers tried the same copper peptide complex on a female patient who had suffered 90 percent alopecia (hair loss). After six months, she recovered almost all of her hair.

Spectral.DNC-S incorporates retinol, a fat-soluble form of vitamin A, because it improves the absorption and effectiveness of ion-channel openers and other growth compounds. Often prescribed together, researchers have found that coupling retinol with ion-channel openers can yield better results than with either compound alone.

The adenosine nucleoside plays an important role in hair growth because it works in biochemical processes like energy transfer (adenosine triphosphate, adenosine diphosphate) and signal transduction (cyclic adenosine monophosphate).
Investigators assessed 101 volunteers in a randomized double-blind trial, comparing an adenosine 0.75% topical lotion against one with niacinamide 0.1%. They applied the lotions twice daily for six months, then evaluated the ratio of vellus (light) hairs to terminal (thick) hairs. For increasing the ratio of terminal hairs, as well as for global improvement, adenosine proved superior to niacinamide, producing a higher ratio of terminal hairs and lower ratio of vellus hairs.

Spectral.DNC-S is fortified with citrulline, a crystalline amino acid formed in the conversion of ornithine to arginine and found in the inner root sheath and medulla of hair follicles.
Citrullinemia, a disorder of amino-acid metabolism, is associated with skin and scalp changes like atrophy of the epidermis, thin and short collagen bundles, and dystrophic elastic fibers. With a diagnosis of reduced citrulline, researchers have noted changes such as brittle blond strands and the presence of transverse opaque bands.

Modern scientific evidence indicates that roots of the genus Panax, commonly called ginseng, may prolong hair-follicle life, exert antioxidant effects, boost the immune system, and provide other benefits.
Several plant extracts have been investigated for their ability to influence apoptosis, the genetically determined process of cellular self destruction. In multiple studies of murine hair follicles, ginseng prevented apoptosis. It also aided the formation of medullary cells, even after application of gamma radiation.